This year we were pleased to have Aveson Middle School student Asher Nee intern at archives.  Asher helped us with filing, copying, scanning and other AHS tasks, while learning more about Altadena's history. What follows is a brief history he wrote about Pacific Electric.


A Brief Summary of the Life and Times of Pacific Electric
One hundred and sixteen years ago, two men, a railway executive, and a banker forged a company that would become perhaps one of the biggest parts of Southern California’s history- a system that is still remembered today, 56 years after its closing.
The late eighteenth century saw a boom in the population of Southern California. In 1880, Los Angeles had a population of 11,183. In 1900 that number was 102,479. The stage was set. In 1901, Henry Huntington founded Pacific Electric. Its interurban and freight lines covered Southern California. What started out as four hundred and fifty two miles of railway, soon more than doubled. By 1920, PE rails stretched from Newport Beach to San Fernando. Thus, the red car was born.
“Largest electric railway system in the World,” the company boasted. It was true, with over 1,100 miles of track, PE was an ever growing success - that is, until the depression hit. 1929 marked a dismal year in US history. Pacific Electric, along with many other companies, struggled to survive in spite of the collapse of the banks. The Railway’s number of passengers went from over 107 million, to less than 67 million - a loss of nearly 38%. It was no longer economical to ride the Red Car. The company just barely made it out alive.
The beginning of World War II brought new hope to the struggling company. Thousands of workers came to Southern California to power up aircraft factories. Gasoline and tires were being rationed, and so these workers used Red Cars to get to and from work. In five years, the number of passengers went up 56%. The Red Car became a vital part of society again.
Unfortunately, this didn’t last long. After World War II ended, Pacific Electric continued to shrink. The Red Car was becoming a thing of the past. It seemed that buses were going to be the way of the future. The company tried to make the switch from trolleys, but without much success.
Throughout the late 40s, and 50s, the number of railways that PE operated was dwindling. In 1961, The Pacific Electric Railway Company went out of business. Thus the Red
Car died. 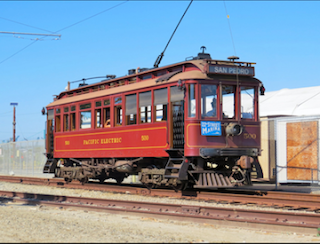 Posted by Jane Brackman at 7:45 AM